More On This Test 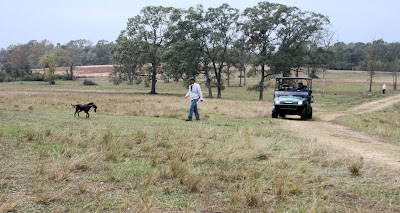 .....................Now that we are "somewhat" caught up, here is the scoop on this combined series: A set of guns sits just across the road that crosses the pond dam. They plant the short blind down the embankment at 75 yards distant from the line. There is an overturned boat deep of these guns and at the water's edge, thus also across the road. The bottom of the boat can be seen from the line, better by some than others, depending on one's height. The line to the long blind goes between the short blind (right of it) and left of the boat angling down the embankment into the water to swim at an angle the remainder of the pond to the long bird, a duck out on land from the far bank at 285 yards distant.
When the dog and handler come to the line, they set up and signal they are ready, and the judges signal the short gun station for a dry pop, after which they give the handler a number. From that point on the handler is on his own to pick up the short blind and then the long blind.
A Ranger or Mule is occasionally being used to help hustle the finished dog and handler out of the picture to save time, as you can see in this photo that includes the first running dog, a chocolate female, #14 FC Abby's Little Cooper, owned by Stephen Abouaf and handled by John Henninger.
Posted by Nat'l Retriever Championship by Vickie Lamb/Retriever News at 11/10/2008 12:54:00 PM