Test Dogs Step Up To The Line... 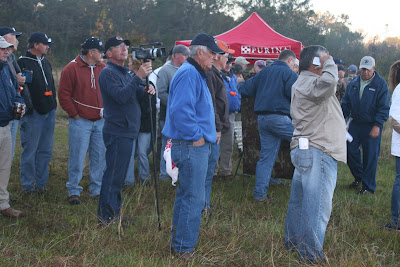 .................and demonstrate the pitfalls and nuances of the test to handlers, judges, and all spectators. The first team of "Mootsie" (FC-AFC Freeridin Smooth Operator, LF owned by Ted Shih) and Ty Rorem had a decent job on the long flyer (more to come on the test shortly) but veered to the right of the short retired en route when almost to the bird, due to some water in a ditch as she opted for water; she eventually went over the pond dam and out of sight. (Retired guns are over the dike in a completely wrapped blind at the edge of the water.) Mootsie eventually had to be picked up. Her run time was 10:30.

Second test dog team of "Nike", FC Just Do It, a Lab male owned and handled by Danny Martin, had a short hunt on the long flyer and then headed left of the white-trunked tree (no water in the ditch on this side, FYI) and as Nike headed up the embankment he appeared to possibly wind the short retired and he then handily picked it up. His running time to delivery of his second bird was 5:30.

Much discussion was shared by watching handlers and spectators alike on this test as these performances unfolded before them.
Posted by Nat'l Retriever Championship by Vickie Lamb/Retriever News at 11/09/2008 08:07:00 AM