What Dogs Are Doing... 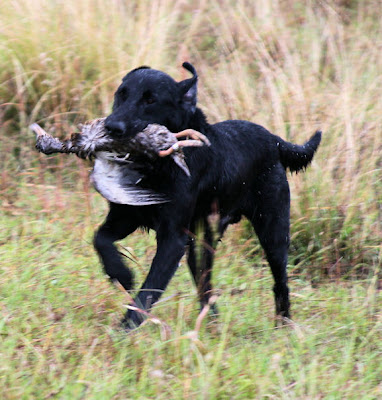 ...Some hunt inside and deep of the short bird while others hunt left of the short holding blind. Still others go right to it or pass either side and make a quick loop or two into the bird.

On the long bird, let me try to explain something from what I've seen up near the line. The last piece of water is more or less a channel. The guns are partway down the left side and throw angled back down that shoreline. To get to this bird the dogs have to drive past the short bird fall and then cross a piece of water, drive up a pond dam/levee and then make a decision...primarily they are going to the left down the shore where the guns were standing to throw and shoot, while others go down the right shore and around or across. Some dogs go out into the field to the right of all this and left and then deep of the flyer station, but recover and get the bird from there. Up to this point I've not seen a dog channel to the bird. Not saying it hasn't happened thus far, but not up to now that I've seen.
In this photo, #58 FC Fen Wizard "Fen" comes in with his long bird.
Posted by Nat'l Retriever Championship by Vickie Lamb/Retriever News at 11/11/2008 03:05:00 PM