All You Ever Wanted To Know... 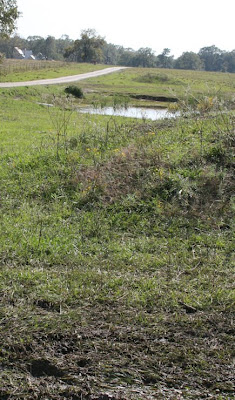 ..about this land blind: Overall distance is 252 yards and it faces south/southeast (we're talking not much more than a hair trigger southeast off south) and the line is behind the leading left edge of a mound--so the initial line goes over this left side of the mound and then angles into the left edge of the same pond we just ran the water blind in but from a different vantage point/location/direction. From there the line is right of a green bush and left of another mound and then angling up toward the lane (which has turned from pavement to dirt) and then across it at an angle to the bird, a drake mallard. Also, the flyer crates are still in the field at the same placement for the last series with two gunners sitting on cue. The crates/gunners are not visible in the photo of the test but they are to the right of everything you see. We currently have an east wind. NWS says it is 1 mph but it's generally a puff or two over that...it does come and go.
Posted by Nat'l Retriever Championship by Vickie Lamb/Retriever News at 11/13/2008 02:16:00 PM